Bed bugs have taken over a huge portion of the United States and the epidemic seems to only be spreading. In the last decade, these hard-to-evict parasites have become number one on America\’s least-wanted list. We know where they are now, but where did these pests originate?

C. lecturlarius, the bed bug, has been around for a very long time. Proof of their existence puts them here, ruining our sleep, for more than 3,300 years. Some theories point to early beginnings in the Middle East, where people were living caves that were also inhabited by bats. It is believed that bed bugs first victimized the bats, who then flew into the caves with them.

As the human population grew, so did the bed bug population. The Romans, Greeks, and Egyptians dealt with the ancient parasites. As populations spread across the globe, bed bugs followed. Soon they inhabited the whole of Europe and Asia, reaching England in 1583. And what was the next stop for these pesky insects? As soon as the British set sail for the new world, so did the bed bugs.

Fighting More Than the British in the New World

Colonists in the 1800\’s lacked the knowledge of how to battle the bed bug that we now have. They fought the parasites in various ways. They poured sulfur, boiling water, and arsenic in any cracks where the bugs might hide. But the colonies suffered from the takeover of the pests, as did the ships traveling from Europe. Only the Native American villages seemed immune to infestation.

Regardless of how long we have been trying to get rid of them, bed bugs continue to move into our homes and businesses. They are extremely difficult to eradicate completely, and many home remedies only remove a part of the problem. To fight a pest this tough, you need help from the experts.
It is very important to act as soon as you realize you have a bed bug problem. Contact Raven Termite and Pest Control, the number one bed bug exterminator in Baltimore City, at the first sign of trouble. We offer a comprehensive bed bug eradication service for your commercial or residential building. Let our team of experts remove your bed bug problem, once and for all. 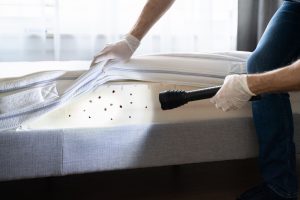 Bed bugs are tiny blood-sucking insects that can be found in homes hotels and other places where people gather. They are not known to carry any diseases but their bites can cause skin irritation and allergic reactions. Bed bugs are difficult to get rid of once they become established in a home so it is

Vacations are meant to be relaxing times away, but when you get home, you can bring with you something besides a tan and souvenirs. Bed bugs can be a part of any vacation scenario and there are pest control in Reisterstown options to help you prevent this nasty bug from biting you and following you

What Is Diatomaceous Earth? Is It A Cure All For Pests?

Get a free pest inspection of your home or business from a state-licensed technician.

We are proud members of the National Wildlife Control Operators Associates (NWCOA)!